Day 3 saw Booker cadet Siena Whiteside flying with Andy Perkins. It was a pretty tough day with very big showers around, some of which were dumping water and electricity in large quantities. The whole Juniors fleet landed out at various stages of their task around Rugby, Newmarket and Northampton. Siena and Andy landed at Sywell airfield (so Siena has at least done her first outlanding!). Booker competitors Mike Collett and Will Ellis were pair flying and both landed at Deenethorpe near Corby. 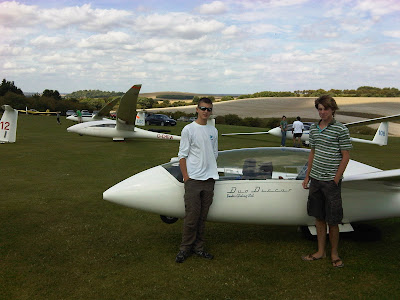 At present there are not takers for today, Friday or Saturday - if you're a cadet or early XC pilot who wants to fly give the office a call!