Today we watched the weather anxiously to see if it would permit BBC sports presenter Mike Bushell to shoot one of his sports reports for the Saturday morning breakfast programme. The windsock was horizontal for most of the afternoon, so we spent some time discussing what was possible and then rigged up a K21 with cameras. Mike interviewed his instructor for the day, Graham Saw, who flew in the World Aerobatics in Finland in July, about the different aspects of gliding. 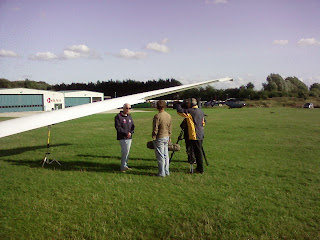 Then Will Hilton, who is already at age 16 making a name for himself in the world of aerobatics, flew a sortie with Graham, and finally Graham did a flight with Mike, during which he flew a loop himself as well as the usual introduction to the controls. He was still smiling when he landed. 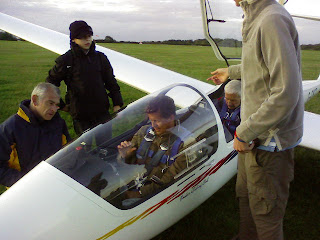 The report should be shown on Saturday 4 Sept, repeated 3 or 4 times throughout the show, so there's no excuse for missing this great piece of promotion for the sport of gliding.
Posted by Jane at 22:20