The annual expedition to Shobdon where we are the guests of Herefordshire Gliding Club is getting off to a good start. On Saturday tthe sky looked like pea soup which after lunch seemed to be consolidating into cumulus so we launched. The visibility was dreadful but there were quite good thermals and it was useful to get used to the site. John 607 and Andrew JTY had a go, Jane took Roland along in ECZ as an extra pair of eyes, and later Roland gave John B an introduction to the area. 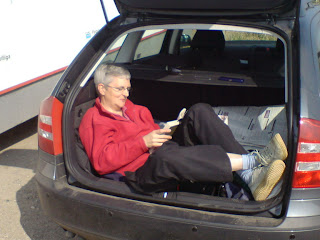 Sunday was a different airmass entirely. Bright and clear and a wind from the NW. Glyn G1 towed into wave at 4000ft, Roland and Graham released at 2000ft and were soon back on the ground. Jane 118 thought it looked liked thermals and released at 19ooft and spent over an hour trying to get to cloudbase before getting the idea and pushing forward into the blue at 2800ft and gently into the wave. Good climbs to 7500ft and skipping forward over the bars nearly to Long Mynd made for an excellent flight. Andrew JTY took this a challenge and went to Shrewsbury, max height 9500ft. John H took a friend for a flight and then flew 607 but won't admit how high he got. Mike P had a good flight reaching 5500ft in JTY. John B had another thermalling flight with Roland, and then Eric did the same - Roland points out that he didn't get in the wave but he wasn't doing the flying. Glyn decided to inspect the paddocks the other side of Wapley Hill, carefully executing a base leg on his approach to his chosen field. Heggie took a break from towing (18 in all) to retrieve him so he was soon back on the field. 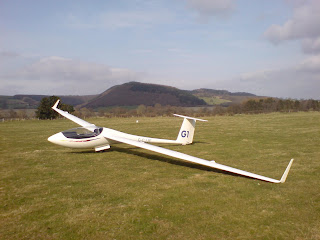 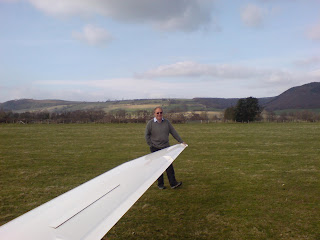 Last flight of the day was Mike P and Graham who got to 10,000ft in ECZ where they stopped for lack of oxygen. This was Graham's first experience of wave flying and the grin says that he can now see what the fuss is about.

Today it's blowing a gale but we are hopeful of more good flying after the front has passed.
Posted by Jane at 11:45

...now I understand why those estate cars are so popular with glider pilots.