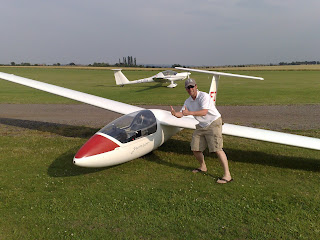 The blog hasn't been updated much today because we started launching at around 12:15, I made it back to the airfield just before 4pm and then went to help retrieve Hugh MacDonald, who had just completed his first 50k cross-country flight. Well, I say 50k but he made it to Bidford which is actually 93k. Not bad going in a Junior and further than what someone in the comp achieved in a somewhat higher performance glider (and who failed to listen to his own sage advice about AAT's, i.e. don't land out).

It took us so long to fly the tug to Bidford (even with a 20kt tailwind) that Andy Betteley insisted on doing a cool pose next to the glider (actually, it's not a cool pose AND he wears sandals). Anyway, we managed a quick turnaround with the help of one of the Bidford club members and headed back to Booker in order to meet up for the Curry Night that Denis had organised. Let's hope the weather isn't too good on Friday!
Posted by Gary N at 22:30